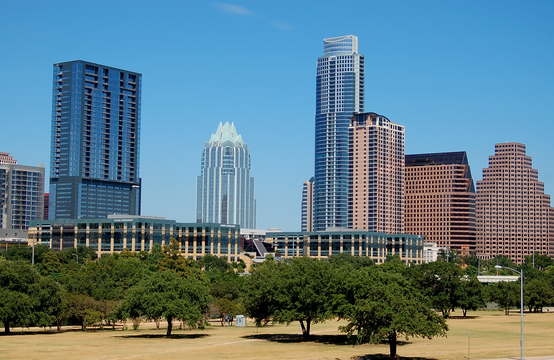 As the capital of Texas, Austin is rich with history and culture. With a population of 885,400, it is the 2nd largest state capital in the country. Named after Stephen F. Austin, the “father of Texas” it was officially chosen as the 7th and final capital of the Texas Republic in 1839. It’s now known as an international hub of music, art culture and high tech industries.

If you enjoy the great outdoors, you’ll love Austin. There are plenty of hiking and camping spots nearby and the city itself is very bicycle friendly. It consistently ranks high as one of the most pleasant cities to live in.

Of course, Austin is internationally known for its lively music scene. A major annual festival, South by Southwest (SXSW) draw hundreds of thousands of visitors from all over the world to see thousands of live acts. The live music scene continues year round in venues all over the city. Austin City Limits airs on PBS channels nationwide AND has an annual festival as well; so there’s never a dull moment in the Hill Country!

We are proud to say we installed the large wall-sized overhead doors at one of the most popular places to eat on Lake Travis– be sure and visit The Oasis. Enjoy a meal and beautiful sunsets over the lake some evening. What a great place to live… here in TEXAS

Things to Do in Austin:

With the legendary music scene, culture and home to the University of Texas at Austin, there’s a good reason why this city continues to grow year after year. But in addition to it’s culture, it’s also a major high-tech and pharmaceutical industry hub with well known companies such as Dell, Apple, IBM, Google, Oracle, Samsung being among the long list of employers in the area. With everything going for it, its likely to continue to grow and prosper for the foreseeable future

Austin is a vibrant hub of culture in Texas, and attracts numerous small businesses. A key feature to securing your business in downtown Austin is a rolling steel door. These overhead doors can be installed above your street-facing window and conveniently rolled away during normal business hours.

Austin is also a destination shopping center with thousands of locally owned, independent stores selling their wares in Second Street District or the Domain. Security is a major concern for these shops, especially after hours. A rolling steel gate or commonly called a “storefront grille” will deter smash-and-grab thieves and provide the assurance your business needs.

The trendy retail spots aren’t the only shops that need to worry about security. Liquor stores, pharmacies, pawnshops and other retail outlests are typical targets for late night break-ins. These thefts aren’t performed by master thieves, but by late-night robbers preying on unsecured store. A secure steel gate will make most robbers move on, and acts as a great deterrent.

Texas Overhead Door serves clients throughout Texas, including Austin. Get in touch with us to learn how we can help protect your business. Call 800-715-8781 or contact us online.

Get a Free Estimate!

This letter is to commend your technician, Mr. Collin Crane, who did an absolutely superb job of repairing my garage door (broken spring), and making adjustments and lubricating... Read More →
- George H. Fort Worth 2-25-2015
View All Testimonials »